On body image and restrictive eating.

Spring is here. Grahamstown, with its erratic weather, decided to head straight into summer, and the beginning Term 4 at UCKAR has been a sweltering hell. And along with the heat comes something far more unbearable: bad body image.

This is a post that I thought would forever be a draft. Each time I try to write it, I find myself hammering away at the backspace key until nothing is left. Today I’m taking a leap of faith (one hand over my eyes) and I will publish this, dammit.

It’s a crushing experience to feel uncomfortable in your own body. If you’re reading this, you’re likely aware of the toxicity of today’s social media and the standards we struggle to live up to. This is why so many of us dread summer clothing. Over the last couple of months I graciously embraced the cold. I lived in black skinny jeans and hoodies. I rejoiced when I awoke to the sound of rain in the morning, because it meant I could bury myself in a rain jacket. I felt confident and beautiful in my winter clothes.

After trying on a dozen outfits yesterday morning and glaring at my legs multiple times in the mirror, I realised that my body image is not where I thought it was.

I began this year resenting my body. It stemmed from years of self-loathing and feelings of inadequacy, which fluctuated during my adolescence. In my first year at varsity, I gained the dreaded freshman fifteen – or, as we call it here, first year spread. There’s nothing intrinsically wrong with putting on weight, especially considering the stressful changes of leaving home and entering campus life. But when the world tells you that gaining weight is the worst possible thing that a woman* can do, that’s what you believe. 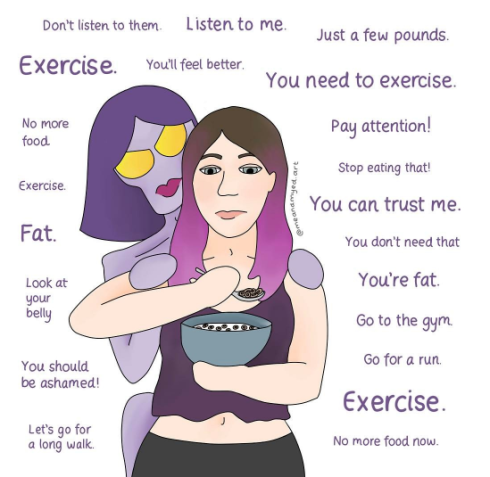 I spent the summer holidays hating my body, and hating myself because of it. Your body and your character are not the same thing, but I’d merged them into one. By the time second year began I’d dropped a few kilos, but it wasn’t enough. I can’t pinpoint the exact moment when I lost my mind a little, but I remember making a mental note to start eating less.

Eating disorders don’t all look the same. My bones weren’t visible from beneath my skin. My hair wasn’t falling out. I still socialised, drank, ate birthday cake. But restrictive eating is a mental health problem. I cannot stress that enough. While I appeared healthy, my mind certainly was not.

I made it a rule never to finish a meal in the dining hall, or I simply skipped them.
I exercised five to six times a week (and freaked out if I didn’t).
I counted every.single.calorie I ate, crying if I went over 1200**.
If I was craving a “bad” food, I chewed and spat.
I stood in front of the mirror in my underwear, analysing my flaws and searching for “progress”.
I ignored the headaches, the sore back from over-exercising, the tiny bruises on my legs and arms, and the voice of reason in my head shouting over the din.

This went on for about four months. That doesn’t sound like much, and nothing truly horrific ever happened, but it made an inexorable dent in my mental health.

Plenty has change since then. When I gained back the weight, I resented myself even more. I won’t go into further detail here (the above is enough for one post).

So, now it’s nearly summer and familiar thoughts are creeping back into my head. The sunshine puts me in a funk that feels impossible to explain to others. But there are no doubt people on campus, and all around us, who feel the same. Improving your body image and recognising your worth as a human being is a lengthy process, and it’s not linear. You’ve got to want to fight that voice, and once you start, you’re already headed in the right direction. So keep fighting it.

*This does not discount the boys who get eating disorders too (you are valued and your struggles are just as important).

**Please note that 1200 calories is roughly the daily amount adequate for a two-year-old child. And do keep in mind that counting calories is unnatural and you don’t ever need to do it.